Trending
You are at:Home»Careers»Selfless Warriors; Their Fight Against COVID-19

You used to be unsung heroes. Today, we sing to you our highest praises.

Worldwide, there are more than 234,000 coronavirus cases, with 9,840 deaths, according to data of the World Health Organization (WHO). Given this big jump in number, it does not look like it will end or slow down anytime soon. You have already witnessed firsthand how this affects our society: Children are out of school. Everybody is feeling like they are in an every-man-for-themselves situation. We have seen an increasing number of people emptying supermarket shelves from bread to much-needed medical and hygiene supplies – a clear manifestation of how in difficult times, people out of fear can become self-centered. But it is also during these troubling times that the bravest and most heroic shine. Indeed, from chaos comes real heroes. There are remarkable acts of heroism and kindness from the people who are working the extra mile to ensure that the most vulnerable members of society are being cared for and looked for. Yes, as seen in movies most heroes wear capes but in this modern era, they are at checkpoints, hospitals, pharmacies, wearing uniforms and face masks for 12+ hours at a time, equipping enough courage and strength to combat the spread of the pandemic coronavirus disease. While many of us are trying to figure out how to stay away from the crowd as much as we can to avoid the transmission, these folks are gearing up for some serious battle and with much braveness and courage is running into the fire. Many private institutions have suspended operation and modified arrangements for their employees in the hope of preventing the spread of the virus, but our doctors, nurses and emergency responders remain in the stressful and scary front lines, together with the local government officials, policemen and military officers who are manning checkpoints and making sure everything’s alright within their area of responsibility. These people are working around the clock putting their health on the line to test the patients, get them the care and attention they need and as much as possible preventing the virus from spreading and overburdening the hospitals. In some places, due to the huge number of casualties, and given the urgency, the doctors have to make the hard decision of choosing who to prioritize and who will be left to perish— a horrifying position to be put in, this is because of the harsh reality that there are more patients than respirators, and medical equipment and resources are becoming sparse.

Our modern heroes are standing firmly between the country and the pandemic – working tirelessly, risking their own health, leaving their homes and their families to keep us all safe. They are indeed worthy of the same honor as to slain soldiers. These doctors, nurses, medical technologists, pharmacists and the rest of the team rarely get the recognition they should have for the vital work they do and the sacrifices above and beyond the call of duty. Sanitation and janitorial crews are struggling to swab down rooms knowing how hazardous it could be for the next patient if there will be a trace of virus left. It is true that sometimes those people who struggle to get respect, fair pay and benefits are amongst the biggest heroes of the pandemic. Just as we praise firefighters and police officers for running toward danger, we should also give our front liners the credit for what they are doing and what they may soon have to do. They are the ones who have to face this serious threat head-on, being exposed far more than any of the rest of us.

Despite so much uncertainty and with lives indefinitely upended, people are still coming together to support and uphold each other. In this time of hysteria and nerves let Mister Rogers’ comforting words put you at ease; 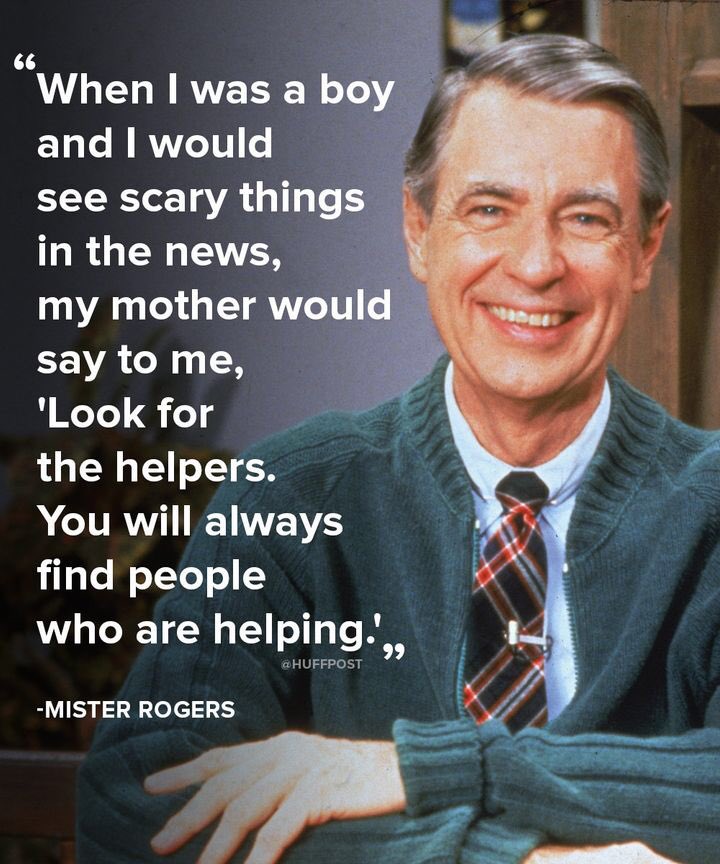 Thank you for your bravery! For letting us know that, in these most difficult times, we are not alone. You are heroes daily, but today you deserve an extra dose of appreciation as you face and battle this serious enemy. We owe you a tremendous debt of gratitude.

Heroes don’t fall from the sky, they are just ordinary people who bravely took the step forward. I believe that we need to act in solidarity to defeat the unseen enemy but above all, we must put our trust in God for he will never forsake us. Jeremiah 30:17 says, “For I will restore health to you and heal you of your wounds, says the Lord.”

Sending love, prayers and healing energy out to everyone as we go through this across the world. -Chin

Christine Leira Tupas, LPT Graduated with a degree course in BS Biology. A licensed Professional Secondary Professor of Biological Science and a licensed aider of American Heart Association. A post graduate medical student and an aspiring Pediatric Surgeon. Everyone says they can write. But it's like medicine, even you know the drug, you cant be a doctor - writing is like surgery.

This site uses Akismet to reduce spam. Learn how your comment data is processed.